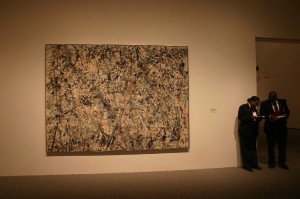 Mark, Darren and several other of the kids were looking at the painting and giggling. The guards glanced at them every now and then and wondered what they were up to.

The children ignored the guards looks and kept giggling among themselves.

The group of school kids kept getting bigger and none of the other patrons could even get close to it. The guards moved over close enough to be heard above the giggling, “Move away you kids and let others have a chance to look at the painting.”

The kids did move grudgingly although the giggling did not stop. They just watched the other visitors as they advanced and looked at the painting oooohing and aaaahing. None of them could figure out what was so special about this painting of colored squiggles. They watched the visitors and the guards while continuing their conversation. They also kept a lookout for the chaperones they had managed to elude thanks to some of the others causing a few distractions.

The guards were wondering where their chaperones were. It was a large group of young children and they were unescorted and getting unruly.

The guards were now so busy looking around the museum for the escorts they were no longer looking at the children who had gotten very quiet all of a sudden.

“Now!” Mark gestured and the children all unsnapped their back packs and pulled out tubs of paint and opened them. Before the guards knew what had happened all the children hurled the tubs at the painting and paint splattered everywhere – on the painting, the guards and the shrieking chaperones who had just arrived.

The children clapped and laughed!

Now that looked a lot better!

Teresa (Tessa) Smeigh at 60 plus is still going strong despite her disabilities affecting both physical and mental abilities. She has bipolar disorder (mental), Fibromyalgia (nerves), degenerative disc disease (spine), and arthritis (joints). Her new journey's include Diabetes controlled by insulin. She is also working on 2 fiction books (mysteries). The books will probably never be finished. She keeps her blog filled with useful content, occasional devotionals (She is a Christian), stories and poems. Plenty to keep you busy. She has also been interviewed by blogs and had other posts published on many different blogs. She is from Southern, NJ. Her family and blog keep her busy.
View all posts by Tessa →
This entry was posted in Fiction, Photo Prompts, Short Stories, Writing Prompts and tagged fiction, photo prompt. Bookmark the permalink.

14 Responses to The Great Paint Escapade